For my self-directed project for assignment 5 I’ve been investigating how a place changes on a very temporary basis when a travelling fair arrives. As part of my investigations I have been looking into other photographers who have worked on similar temporary transformations. Although John Darwell’s “Dark Days” project is a much darker theme than a travelling fair, it does use the idea of a places becoming something different; an event that assigns a very different sense of what that place is about.

Although several of the photographs in this set explicitly depict the terrible effect that the foot and mouth outbreak had on Cumbrian farming, others are less explicit and rely on a more understated sense of fear to articulate the horror.

Here a lone figure stands on a crest in the rise of a road. 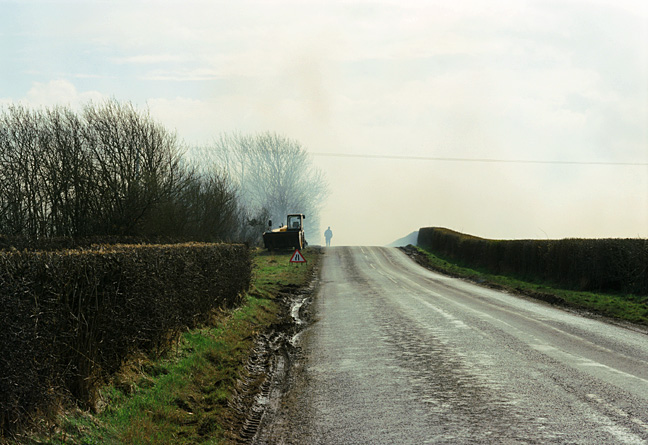 At first glance the person appears to be surrounded by mist, so that it is not clear which way he or she is facing. The top left of the photograph shows that it is actually a sunny day though, and it eventually becomes clear that the mist is actually smoke, arising from a fire that has been deliberately set to destroy animal carcasses. That the image does not immediately resolve itself, and the reality takes a little while to reveal itself, adds to the sense of horror at what it implies. Without the project title as surrounding context the image still produces a sense of fear, there being something beyond the rise that we do not want to face. Knowing the subject only adds to the disturbing effect of the image. This is the sublime, in the sense of it alluding to something greater than ourselves, something that does not respect or care about us.

This photograph can be considered as almost an inversion of Caspar David Friedrich’s painting “Wanderer above the sea of fog”.

Here the main figure is very much in the foreground, and the fog is below the figure. In Darwell’s photograph the figure is in the distance and becomes much less important than the landscape. The smoke surrounds the person, and reaches high into the sky above them.
Malcolm Andrews describes how this painting is often quoted as depicting the sublime, in the sense of the subject being lost in boundless spaces. He quotes Carl Gustv Carus, writing about viewing the painting,”It is a silent devotion within you……you are nothing, God is everything” (Andrews, 1999:143). However he then goes on to say that the foregrounded figure and the rock itself prevents us from having the sublime experience; “We cannot have the sublime experience open to the figure, mainly because of the very presence of that figure” (Andrews, 1999:143). Andrews’ concern about the figure interceding too much for this to be truly sublime is removed in Darwell’s photograph. The figure is away in the distance, there is nothing interceding between we the viewer and the sense of something disastrous beyond the horizon. The sublime experience is open to us; not of God, as that generally implies a concern for our well-being. This is something nameless that does not care one way or another about us.

This site uses Akismet to reduce spam. Learn how your comment data is processed.